Rake and Ride on the Gussy

Looks like some trail minions, of the Huckle and Buckle variety, took it upon themselves to make some unauthorized additions over the weekend.  Some are great and others tell me that you may  know how to ride but no nothing about how to build.  Please don't take that as an insult but hopefully some of what I am about to critique here will rub off. 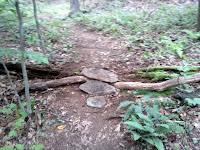 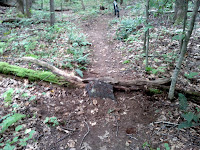 I like what they did to this up and over, firming it up and adding another log.  Gives you a few options, such as rolling it, or hucking it.  20 feet south of this they moved the blow down, out of the trail that I was using as a control point to slow down riders before hitting the technical section.  The removal is still good because it improves flow!  This is great! 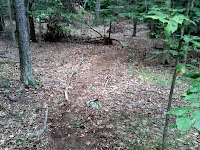 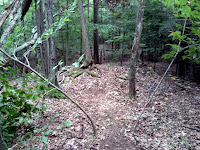 
I call this the Three Sisters because there are three distinct lines on this rock that you can roll.  The blowdowns after the Hurricane and Snowtober storms blocked the run into roller and I never felt like opening it back up because it really needed a better lead in.  The picture on the left shows the lead in coming at a 90 degree off the Gussy Trail, which isn't that great because it disrupts the flow.  Then when you hit the roller there should be three lines leading to the three different options.  The one on the right (going big) is really sketchy and requires a sharp left turn.  I couldn't find the line to the middle sister and the line to the youngest was there but I don't think it was them that intended that to be a line in the first place and was probably the original. 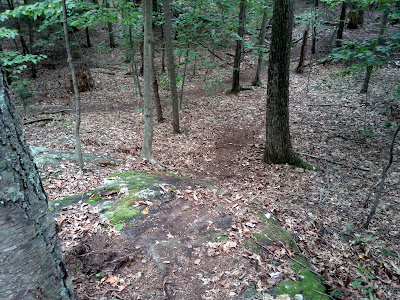 The roll out is pretty clear, just watch out for the tree on your right!  What would really make this a lot better is if the lead in started further down so that rather than starting at a 90 deg from the trail it started at a 30 deg angle and then further in split the trail into three sections.  The right most section needs to cut back more in order to line up to the steepest section better. 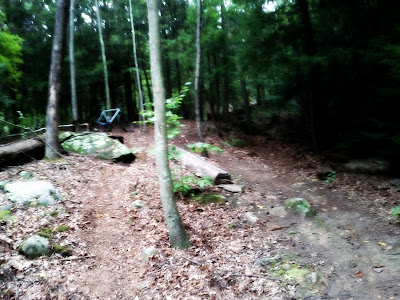 There is a new Huck at the second log ride, on the left (in the picture above).  It's funny, but I have always wanted to roll this rock but never did it.  Going to have to try it sometime to see what it's like.  On the other side is another, smaller, huck that I have rolled in the past but never gave it a lot of attention.  The minions gave it a little more defenition and shoe raked the landing. 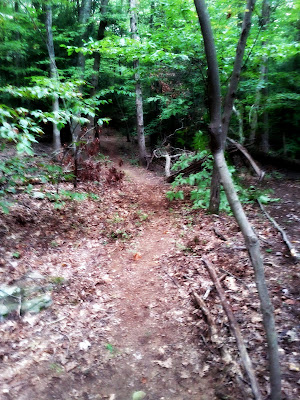 I am on the fence about this last modification and I can see why you did it but I am not sure that I like it yet.  Basically they created a cheater line so you didn't have to maneuver around the tree that fell on the original trail that moved the trail over a little to accommodate last year.  While it straightened out the trail leading into the down hill section after the second log ride, my only fear is that it's about a 10% slope and that's right on the edge of fall line.  If anything it needs to be benched and the treadway needs to be brought down to the mineral soil.  Rake and ride is just not the way you do things.  I unblocked the original section but need to come back and ride it a few times to see if I really like the change. 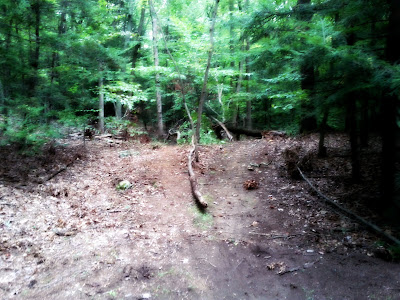